One of the product’s slickest features is “active presence”, which allows you to see who’s in a place at the same time you are.  Once you’ve found out who’s there, you can learn more about the other attendee by viewing his or her business card or by sending a direct message.

Taligent was a well-funded joint venture between Apple and IBM, initially started at Apple to develop a replacement for the Mac OS.  The project I worked on, called Places for Project Teams, was a groupware product based on Lotus Notes.  I was hired as a consultant to run a user study on some early design ideas and was one of only a handful of consultants retained after a major layoff.

Develop an easier-to-use front-end to Lotus Notes to be used for collaboration among team members.   Lotus Notes database file structure was used as the backend.

We explored the idea of virtual meeting spaces where users could share information and work together on the same or different documents.  We looked at the desktop as a metaphor for the meeting place, but ultimately decided on a timeline metaphor – a timeline for each “place”, based somewhat on the score/stage view in Macromedia Director (now owned by Adobe). 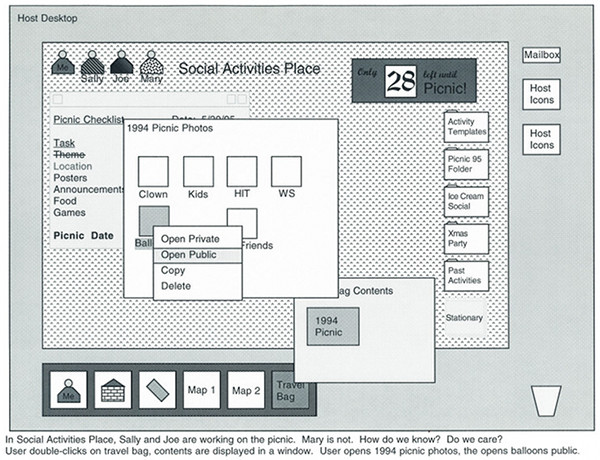 Using any of four views, the user can get a different perspective on the information in a place. The timeline view provides a high-level look, with information arranged as discussion topics in chronological order.  A “newspaper” view arranges the topics in a headline format, for easy readability.  An outline view shows topics in a conversation format as responses to a particular discussion thread.  And a “people” view lists notes by author.  These views will be familiar to Notes users. 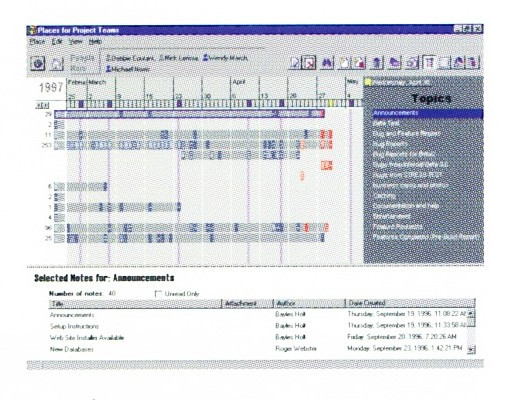 The timeline view allowed the user to view a timeline by topic.  This view had several unique features.  The topic overlay (grey block on right) could be moved over the timeline to better match up the timeline of interest with the topic name.  The timeline started on a project start date and was dotted with blue or red rectangles representing documents posted to the project on a given day.  Blue dots were documents that were read and orange were docs that were unread.  As the user scrolled to the right (later in time), the timelines “fell off” the page on the left, but the docs piled up, increasing the docs count on the left side.  A full list of docs for a given project were listed in the horizontal view at the bottom.

Collaboration is fostered through email communication, discussion notes, and shared documents.  A concept I developed to help foster collaboration was the electronic business card.  It occurred to me that if we were going to provide a digitized business card we should take the opportunity to enhance the information available. 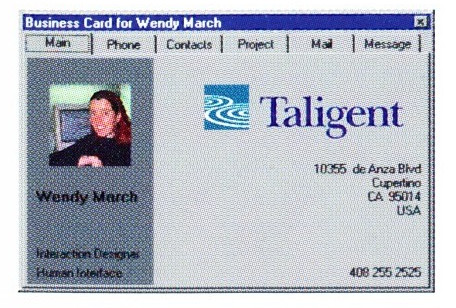 The information on business cards is generally static due to the difficulty and expense of creating new business cards.  (This is less of an issue in the 21st century.)  With an electronic business card, it becomes possible to display much more dynamic information, such as: what project or projects is this person working on, what documents have they created recently, who are they collaborating with, what are they responsible for, and even their participation in recent discussions.  One of the use cases that this addresses is how new employees get up-to-speed on a new project.  They can use the electronic business cards to become familiar with the players and their roles.

This was a good solution because

It provided a much simpler user experience to access Lotus Notes database information, but also provided an enhanced collaborative experience, taking advantage of the nature of dynamic information to help teams stay up-to-date and connected.

Several patents were issued to me and several of my colleagues for this work: